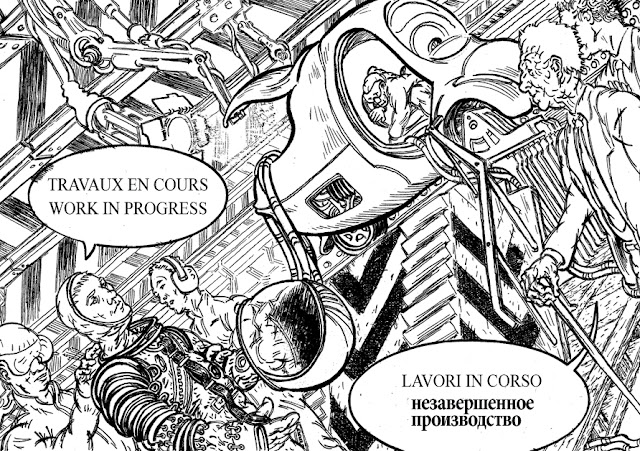 O Samir, Where Art Thou? O Samir, Where Art Thou?

What Do We Know About Samir Noferi? Well we know he composed the Sonoritès Vide and after them L'Eponge, and we know he disappeared after the distribuition of his last work ( L'Eponge ), but...What did happen to him? Why did he vanish? Whoever is responsible for? How is possible noone has seen him? Where is he? Where Art Thou Samir?

( these are links to other videos of Tetralogy: the first one in order to listening, the second one, the third, the same you can find above, and the last one; this is the first Teratology we can find in the album " Biunni e Brunelli a Palermo runne'gghié ": the first Ecumenopolimanteia track, the second one, the video and the music of the third one and the video, and the last one which concludes the first tetralogy, of course the two tetralogy are many different, but what they say is tha same thought developed in different environments and goals )

and this is to remember what Ecumenopolimanteia is "All the tracks Sonoritè Vide are made to be the "soundtrack" of my performances with the same name, performances about the effects of the frequencies sound vibration on minds; for most of listeners the tracks will sounds like noises [ maybe ] in rhythm, but It is not to exclude that they can have effects for those more sensitive" 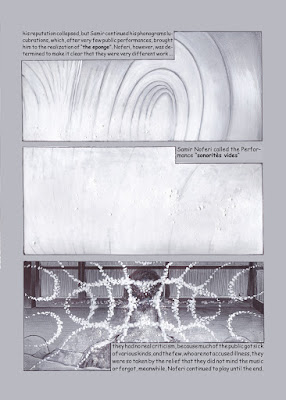 some madman put on the web the sonoritè vides by Noferi, be careful!!!

I also found this

IT SEEMS THAT THESE 3 TRACK ARE LINKED TO EACH OTHER

GIVING ANOTHER LOOK TO THE PROLOGUE

the work in progress, the Project as I prefer to call, L'Eponge de Samir Noferi, continues, meanwhile looking back on what get start whole things I think it's a great starting point...

The Absolute First Samir Noferi's Album found, you can listen a Noferi still immature, but already here you can find the roots of his research leading, leads and will lead to L'Eponge.

"Biunni & Brunelli a Palermo Runne'gghié" was born by chance, initially intended to be a photograph that could act as cover to a fictional album Jazz, then fell to the limbo of unrealized ideas, until a little bit contrived by life events I was forced to temporarily put aside other projects and try a different expression, for what in my life I have had to face in spite of myself for the hundredth time. And in this context "Biunni & Brunelli in Palermo Runne'gghié" has returned in a new form in this musical experiment without any pretense. N.B. Biunni & Brunelli a Palermo Runne'gghié "translated" dialect literally means "blonds and brunettes(male) anywhere in Palermo", where "Biunni" means someone fell from the clouds, which does not notice or if you would like a naive, and "brunelli" an uneducated, a little good, but also an asshole ... The Four Matriarchs of the seminomadic tribes in which Tögřam grew, the four matriarchs were leading each one of the four groups that form the tribe, before joining because they are semi-nomadic usual exchange part of what has been hunted with other tribes, frequent exchanges are made with other food, these big shells of snails reared are all that remains of some previous meal of the matriarchs Qhooyà Nnhà, she says the last word on many of the issues of the tribe, for some she is the most powerful of the matriarchs, because leads the group of warriors even with different customs and lifestyles, the four small tribes before joining shared many things, among them the respect and the cult of the memory of their ancestors, and the matriarchs, from their leading position, remember to anyone invited in their tent the strong bond with ancestral relatives Saahb Ynn, , her group is the one of the hunters, even before the four tribes were united, each area in which they moved seemed not to hide secrets to their unmatched skills

sometimes the tribe performs exchanges with the populations that occupy a permanent territory, which presents particular resources, in these cases the matriarchs wish to acquire particular objects of everyday use, as this earthenware jar for the water embellished with decorations Rasheed-Ha, leader of the guardians, this tribe used to exchange performances of various kinds with stable populations from season to season, but have never been able to get used to a sedentary lifestyle, in the new tribes have taken the task of guardians because they knew more people and more knowledge in the field of defense and in maintaining then the other groups.
Pubblicato da Unknown a 08:01 Nessun commento:

The three trailers made

[ Why tell the “Great Mother”? Right in order to reflect about the role of the “Mother”. Right to emphasize that before the Mother there was the individual, and how motherhood is not that:an interpretive key to what we are used to describe the side “ying” of things. When it becomes a seal, that key gets corrupted, a social stigma to the role, a system of control and harnessing of feminine energies. It makes sense for us to talk about it, when it is one of many potential opportunities of the individual, one of its characteristics and not its definition. The Great Mother is the Great Woman, but it is mostly the Great Human Being. Because her? so why should we tell her story? Why a house needs bricks. Because we have to pick from the imagination of the reader, we can’t creat from nothing. Even because we have to recall products from the collective knowledge and analyze them - both writer and reader. Are these products true? Or have we been cheated? ] 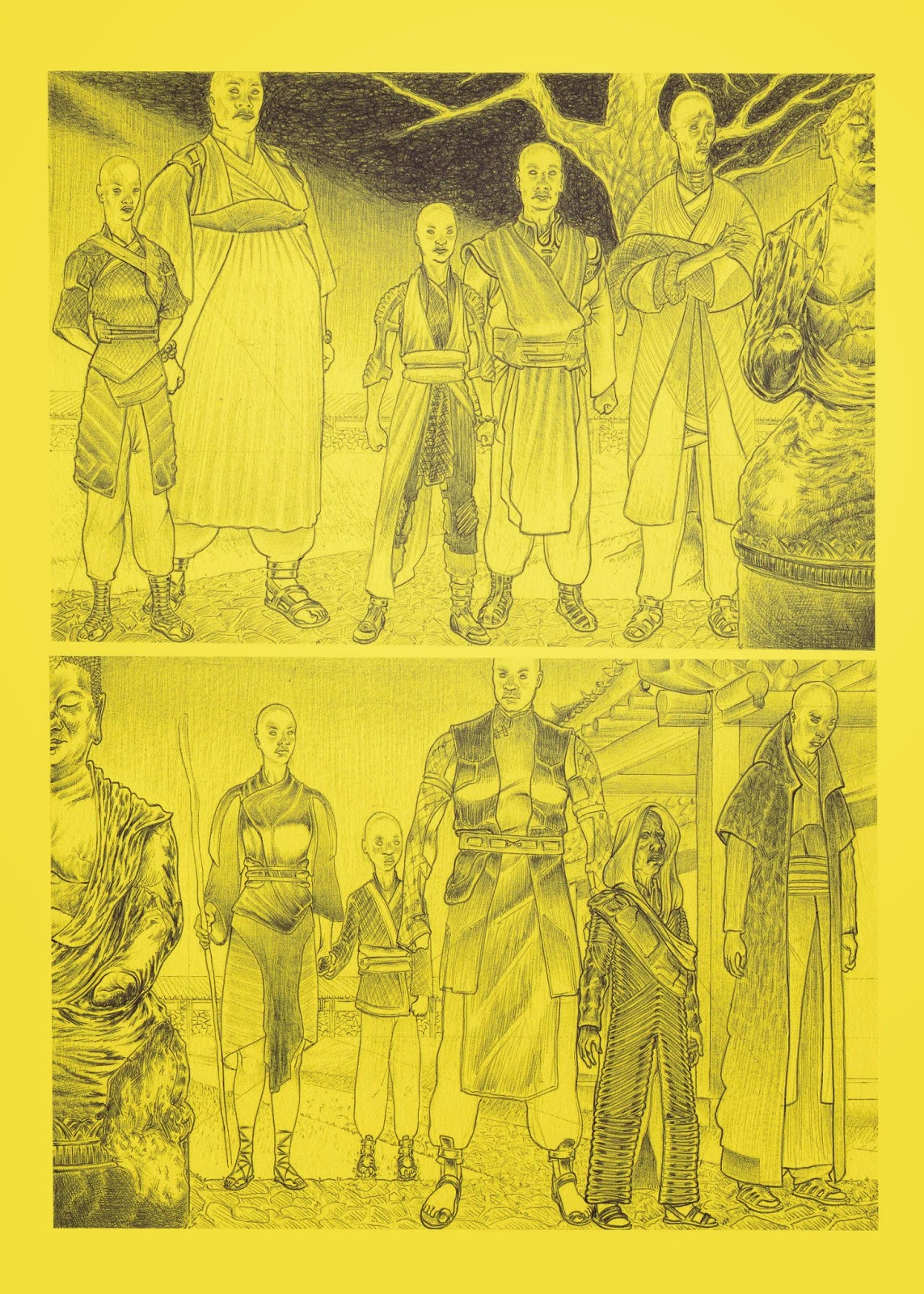 
( There are stories that are not easily to tell. There are ways to get them out of the formless chaos of imagination, to give them dignity of form and translate them according to standards and intelligible figures on paper, to make them understandable. The problem with some stories, is that they are born in a space defined between mind and heart, they have the imagination as Mother, and the understanding that comes with it as Father. These stories leave who wrote them defenseless and show muddy reflections, imaginaries that can not be deciphered even by the writer who imagined them. In a word, certain stories kidnap the writer, do not let him tell them, but claim to be told: of course characters and scenarios are owned by whoever produces them, but that’s all, just few pages here and unpredictable interactions arise, the protagonists act independently and the writer himself is reduced to play the role of a demiurge, disenfranchised, a translator of reality ”  beyond” , a delegate of worlds, of stories, of victories and defeats. This is for me l’Eponge de Samir Noferi: the delegacy, led by my imaginary to the reader, organized into scenes and words and not oppressed by the will to dominate a story, to frame it in canons, to disfiguring it with smudges of Ego, rather than letting it amaze us, as we would be amazed by the achievements of our own children. I wish you a good read, wishing that same sincere amazement that will accompany us, and discover in telling this story, telling it to you. )